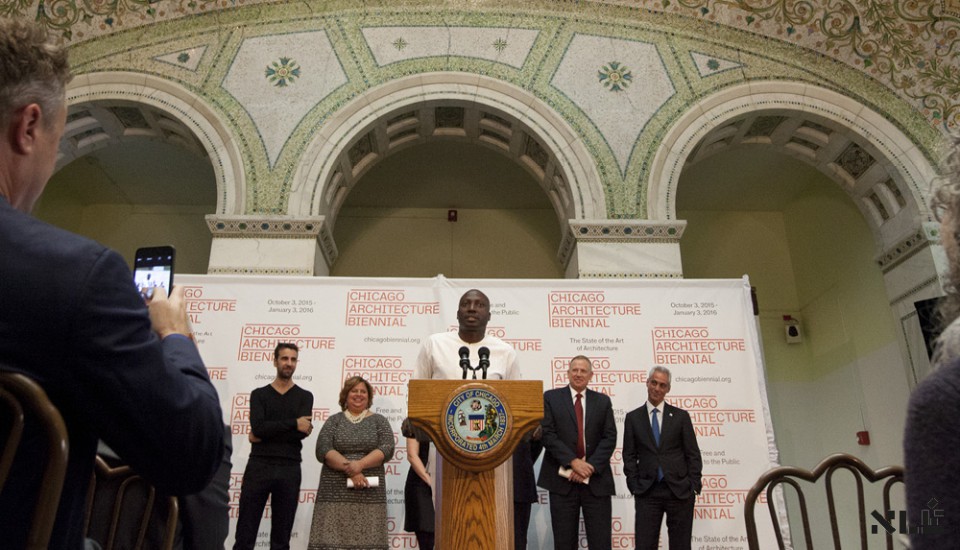 CHICAGO, October 1, 2015 – The Chicago Architecture Biennial will officially open to the public this weekend on Saturday, October 3, 2015. The largest international survey of contemporary architecture in North America will run until January 3, 2016. The Chicago Architecture Biennial was envisioned by Mayor Rahm Emanuel and is an outgrowth of the comprehensive cultural plan developed by the Department of Cultural Affairs and Special Events (DCASE) and its commissioner, Michelle T. Boone.

The participants of the inaugural Chicago Architecture Biennial will present unique architectural projects in the Biennial’s exhibitions and programs, which will take place at the Chicago Cultural Center and other sites across the city, including Millennium Park, City Gallery in the Historic Water Tower, Expo 72, and the Rebuild Foundation’s Stony Island Arts Bank, the latest initiative of acclaimed Chicago artist
Theaster Gates.

“The City of Chicago is synonymous with leading architecture, from the world’s first modern skyscrapers to the forefront of urban design, which is why Chicago is naturally suited to host an architectural event of this scale,” said Mayor Rahm Emanuel. “The study and discussion of architecture is engrained in the civic fabric of Chicago, and the first-ever Chicago Architecture Biennial provides a one-of-a-kind opportunity for both seasoned professionals and everyday citizens to enjoy, discuss and critically examine the design that impacts the world in which we live.”

Accompanying the exhibition is a robust roster of public programming, including performances, lectures, panel discussions, workshops, exhibitions, tours, film screenings, and social events. In an age of accelerated change, today’s architects, artists, designers, planners, and activists are developing an extraordinary range of visionary ideas that test the limits of these realms of everyday life. The Biennial’s programs explore issues at the heart of the practice of architecture, while inviting dialogue about how we build, inhabit, and shape our world. Ranging from a performance conceived by Bryony Roberts and the South Shore Drill Team that will activate Federal Plaza; to lectures delivered by Pritzker Prize winning architects, such as Jacques Herzog and Thom Mayne; to tours of Frank Lloyd Wright’s renowned SC Johnson campus in Racine, Wisconsin; the Biennial’s programming offers the public a variety of ways to engage, explore, and ask their own questions about the state of the art of architecture today.

“At its core, the Chicago Architecture Biennial offers an unprecedented chance to celebrate the architectural, cultural and design advancements that collectively shape our world and our experiences,” said Michelle T. Boone, Commissioner of the Chicago Department of Cultural Affairs and Special Events. “The Chicago Architecture Biennial is an important new platform to stimulate discourse and bold, new ideas for the field in the coming months.”

Beginning with opening weekend festivities on October 3rd and 4th, and continuing over the course of three months, more than 100 cultural and educational institutions across the city and region will present more than 200 collateral events on the occasion of the inaugural Chicago Architecture Biennial. The Biennial and its partners will leverage Chicago’s unique legacy as an incubator of architectural ideas, to take stock of the extraordinary ways in which architects, artists, designers, planners, activists, and policy makers from around the world are tackling the most pressing issues of today and generate new thinking about architecture and its implications for our times.

“Over the past year, we have had hundreds of thrilling conversations with architects from around the world about the important issues and innovations shaping the future of architecture and design. We are so inspired to now see these ideas come to life with these dynamic installations found throughout the Cultural Center and throughout Chicago.” said Sarah Herda and Joseph Grima, Chicago Architecture Biennial Co-Artistic Directors.

“BP has a long history of contributing to the Chicago area which is home to more than 2,000 of our employees,” said BP America Chairman and President John Mingé. “The Chicago Architecture Biennial is another sign of that commitment, and we hope that it both honors and adds to the tradition of architecture that has made this city great.”