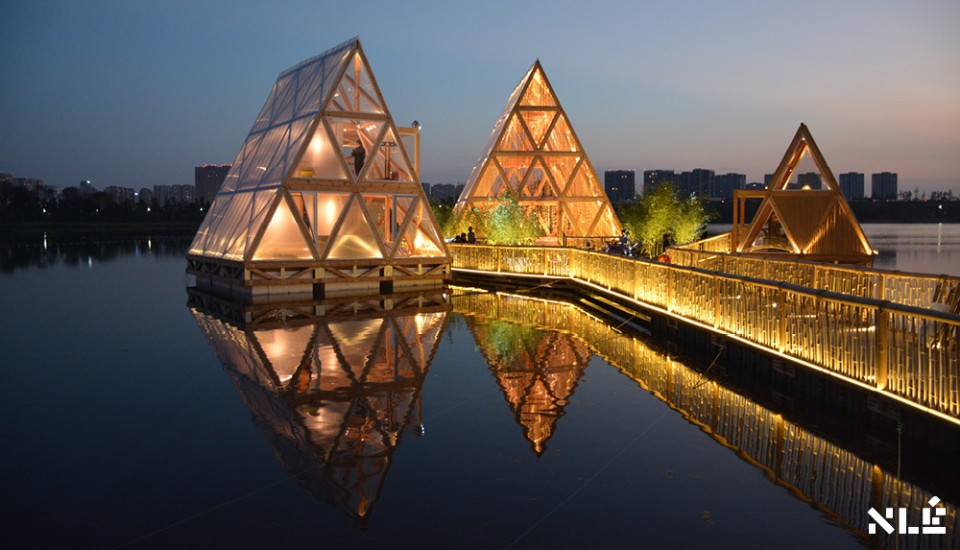 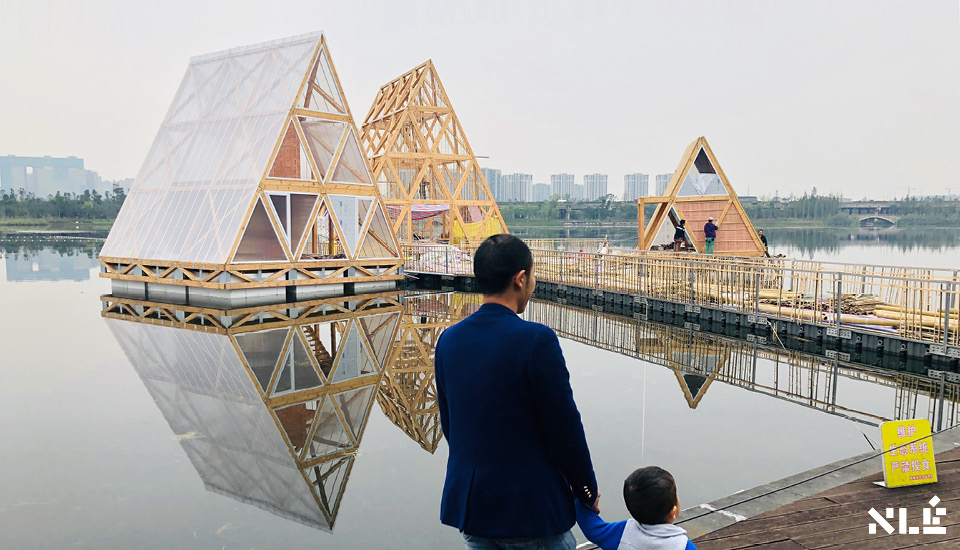 MFS IIIx3 is the fourth prototype and third iteration of the Makoko Floating School — a prefabricated self-build system for water to address the challenges and opportunities of urbanisation and climate change. MFS IIIx3 is part of Cosmopolis #1.5: ‘Enlarged Intelligence’ exhibition in collaboration with the Centre Pompidou and Mao Jihong Arts Foundation running from November 3, 2018 to January 6, 2019.

Set in Jincheng Lake in Chengdu’s new ecological belt, MFS IIIx3 is introduced into the dynamics of a 2,200 year-old history of water management expertise, originating from the Min River (Minjiang) and from Dujiangyan — an ingenious irrigation system built in 256 BC, and still in use today — keeping the southwestern Sichuan province free of floods and drought and making it one of the most fertile and economically developed urban and agricultural areas in China. MFS IIIx3 offers an approach to, and revives, an ancient yet contemporary civilisational relationship with water, originally inspired by the water community of Makoko in Lagos, and now adapted for the water city of Chengdu.

Following NLÉ’s first prototype the Makoko Floating School (MFS I) developed in Africa’s most populous city of Lagos, Nigeria in 2013, Waterfront Atlas (MFS II) launched in Venice, Italy in 2016 and Minne Floating School (MFS III) in Bruges, Belgium, in 2018, NLÉ in collaboration with Fanmate and KRJS in Chengdu, has adapted and scaled MFS III into three modular sizes — small, medium and large. The three floating structures are constructed from wood and Chengdu’s abundant local bamboo — to create an open air concert hall, an indoor exhibition space and a small information center, all clustered around a communal plaza — bringing people together in a hub for reflection about the arts, water cultures and future ecologies.

‘Cosmopolis #1.5: Enlarged Intelligence’ presents artworks and programs by almost 60 artists and groups, exploring ecology, technology and the commons, and envisioning how we today may draw on intelligent technologies, as well as on ecological intelligence, to advance social values—rather than leaving capital to largely define the uses of these techniques and knowledge systems.

The Cosmopolis platform was launched by the Centre Pompidou in 2016 to highlight research-based creative practices that are rooted in a particular context yet engage in international conversations, reflecting on cultural translation and the situatedness of knowledge. The first two-year cycle, centered on collaboration and collective practice, culminated in the exhibition ‘Cosmopolis #1: Collective Intelligence’ (Centre Pompidou, 2017).

‘Cosmopolis #1.5: Enlarged Intelligence’ is the second major exhibition associated with the platform. Stemming from the current cycle of research, the project engages with urban and rural space, and the shifts in the dynamic between them due to the digital economy and other technological, ecological, and cultural transformations. The cosmotechnical theory of philosopher Yuk Hui, presenting “the unification of the cosmos and the moral through technical activities, whether craft-making or art-making,” has informed the project through its re-envisioning of technology within specific historical and cultural contexts.